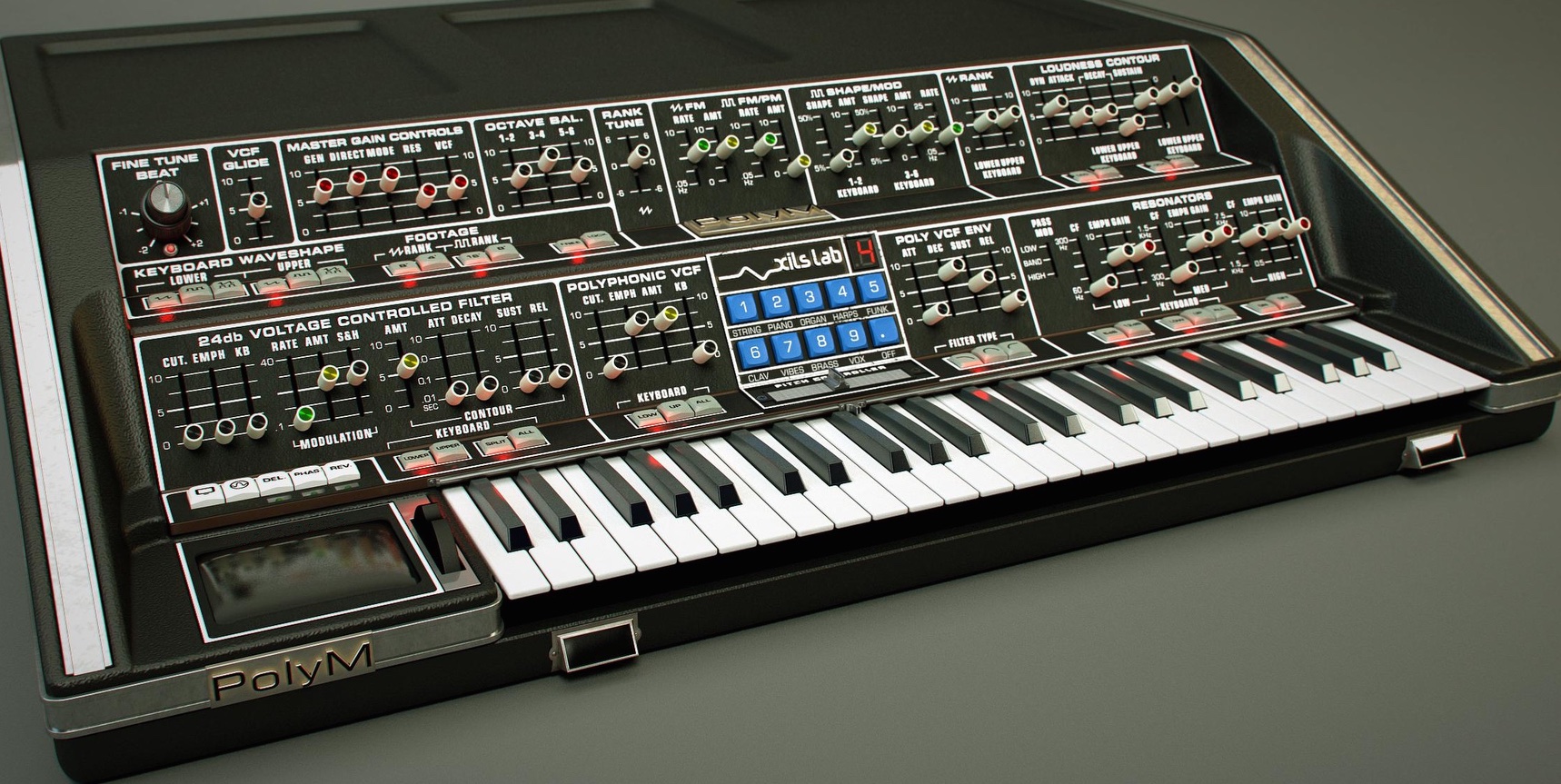 There’s not a whole lot to say about Moog synthesisers that hasn’t already been said in countless books, articles and TV documentaries. The big creamy tone and trademark ladder filter are synonymous with the ‘Moog sound’, which is not just marketing gumpf, they really do sound great and you can instantly tell it’s a Moog when you hear one.

These days, a Moog plug-in is probably one of the most common synth emulations out there and not something I’d get too excited about. However, when the XILS-Lab PolyM dropped in my mailbox I was interested to try it out, mainly because a Polymoog is one of those synths I will probably never get to play, let alone own! Also, I cant remember ever seeing a virtual version of one, at least not as a commercial release anyway.

The original Polymoog 203a was released in the mid-70’s, which was followed by a stripped down version 280a which was more preset orientated. Gary Numan’s Cars features the prominant Polymoog string sound and his Pleasure Principle album has more than a smattering of the synth across it.

Installing the PolyM is a relatively simple affair, for those familiar with the iLok activation song and dance.

Visually, the interface is very direct, without any major hidden menus or routing options. Pretty much everything is accessible on the front panel, as with the original Polymoog, with the addition of some extra controls for effects etc. To be honest, the graphics didn’t blow me away, it looks pretty dated in that respect, like of some of the early Native Instruments emulations (remember FM7?) with the majority of control animations only a couple of frames. I only mention this as I’ve become accustomed to plug-ins with super slick animated interfaces and with today’s modern graphics cards and processors, why shouldn’t it be?

Aesthetics aside, the plug-in actually sounds really decent. XILS-lab have done a great job in emulating the unusual divide-down technology featured in the original Polymoog. This was a hardware design that took multiple (12 in this case!) square waves to represent the top octave of the keyboard, which were then divided down to create the lower octaves. This already complicated system was added to an with individual chip (Polycom) containing a VCA and fixed filters for every key! Anyway, the Polymoog was notoriously unreliable due to this complex underlying system and possibly the reason it hasn’t been emulated as much as say, the Minimoog.

The presets are also really, really good. Probably some of the best presets I’ve heard in a soft synth, lots of really usable stuff in there showing off a wide range of tones and timbres. The three band filter, FM, multiple envelopes and filter-glide parameters help cover a multitude of sounds. Yes you can do the classic moog bass, but it really shines with brass, strings and really nice evolving pads. There is some lovely subtle pitch wavering and saturation effects I can hear in there, which gives it a certain worn out synth vibe.

Obviously I cant directly compare this to the original, but it’s clear the developers have spent a long time analysing and attempting  to recreate the nuances of the original. One thing I did notice, is with the filter emph (resonance) cranked fully up, I did notice a bit of audible ‘stepping’ when moving the cutoff slider, an unwanted artefact a lot of developers seem to have overcome in recent years.

I made a quick and dirty demo using four instances of the PolyM and a drum synth to try and recreate some 1980’s NRG and give you an idea of the sound:

Overall my initial impressions on the interface design were soon extinguished when I started using the synth. It sounds big, bright and imperfect (in a good way). Fun!

PolyM is available to purchase as a USB eLicenser or iLok (1 and 2 dongle hardware or software) protected plug-in for an introductory promotional price of €99.00 EUR until August 31, 2017 — rising to an MSRP of €149.00 EUR thereafter — from XILS-lab: HERE