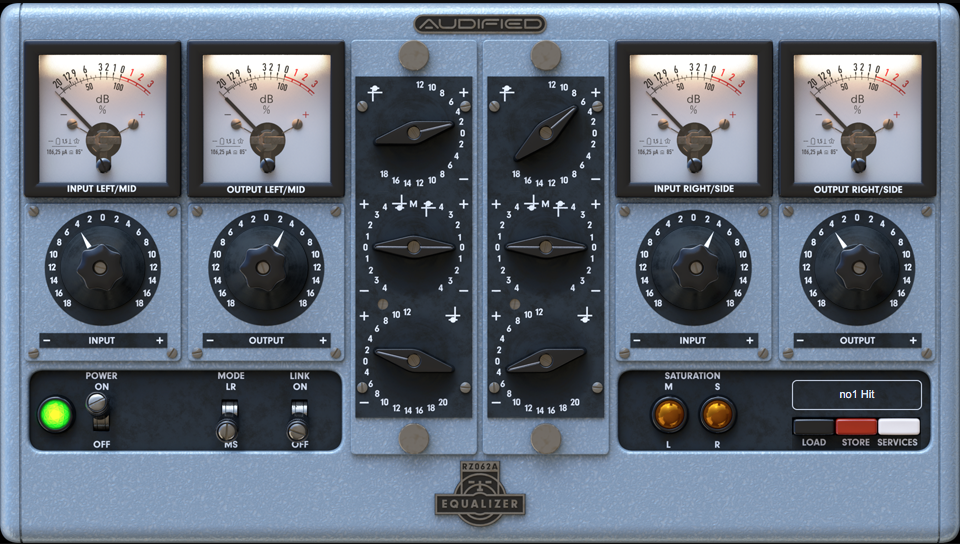 The RZ062, as you may or may not be aware, were originally designed in 1960s Germany and were installed in mixing consoles to produce particular tonal colouring and a certain acoustic impression. Unlike today’s modern EQ’s, the RZ062 were designed with fixed bandwidths that simultaneously boost and cut on the selected bandwidth, something that I have not personally come across before and had me somewhat intrigued from the start. Brief history lesson over.

The plugin comes from a company called Audified and they have two versions available, the A and B version, authorised through the popular iLok system and is about as simple as it gets to install within less than ten minutes from download, I was up and running within the latest version of Logic X 10.3.2 (well done Audified)

The layout of the EQ is the first positive, it looks slick and simple, and although it is often said, don’t judge a book by it’s cover, I was getting excited about the muted tones and the somewhat inviting lack of overall parameters.

The main section of the EQ consists of three bands of fixed bandwidth EQ curves:

Mid Control, which I feel is where the first set of magic begins to happen, rotates the entire frequency curve on a mid frequency (650 Hz), as mentioned previously when you boost the treble frequency the bass frequencies are simultaneously lowered and vice versa, I found that this helped to add a good amount of body, it was almost like adding weight without the muddy thickness.

Treble control which adjusts frequencies between 1kHz and 10 kHz, I always tend to push a an EQ in this range to see how harsh the response is in this area, and I have to say this is where the RZ really began to shine (no pun intended)

Having previously been lucky enough to have access to a Manley Massive Passive stereo EQ, I can honestly say, for a plugin the RZ is not far off with producing an airy almost silky high boost, I used the RZ on a recent mastering job, a Folk/Americana project, under strict instruction not to make the masters too hi-fi, I figured it would be worth a shot and added the RZ to a track that I felt was already finished, tentatively I boosted the high end and the vocal lifted nicely whilst adding a soft presence to the twangy guitar all the whilst not adding any of the associated harshness that can sometimes come with 4/6 kHz boosts.

Metering for the EQ is not just aesthetically pleasing, the mellow saturation when increasing the input adds a very very nice tone, although I found when pushed, did add a tiny bit too much up top, if I wasn’t under strict instruction, this would be a welcome addition to most masters for that extra sheen and presence.

As with most new EQs released, MS is a very welcome addition and the RZ delivers extremely well in providing width without getting phasey. Simply switch the mode from LR to MS and the left side EQ becomes the Mids and the right EQ becomes the side.

Audified have created a plug-in that is very simple to use, adds air, width and presence without overcooking it and looks the part too. I can’t think of anything that I dislike about the RZ and is easily closest plug-in I’ve used that emulates high end hardware style processing at a fraction of the cost.