I wouldn’t call myself a mastering engineer by trade, although I have mastered a lot of tracks for different labels and artists over the years and continue to do so. I also taught audio mastering for a number of years at a higher education college. So I have a fairly good handle on what sounds good to my ears and how various tools are used for the process of enhancing audio, in the digital domain at least.

For many years I have trusted a now relatively old version of Izotope Ozone for my limiting, between that and Waves L3 I felt I could cover a lot of bases, in terms of electronic music and it’s many variants.

When this new plug in dropped in my mailbox I was super keen to try it out, if only for the bold marketing blurb that accompanied the press release:

“Elevate is the most advanced mastering plug-in ever created. This unique multi-band limiter, human ear EQ, and powerful audio maximizer will increase the loudness of a mix while maintaining or improving its dynamic perception. It uses intelligent, adaptive technology that responds in real time to music, creating not only the loudest but also the best-sounding master.”

Installing with ilok worked off the bat as expected and I started by trying the plug in on some ambient music I’ve been working on for a music library. 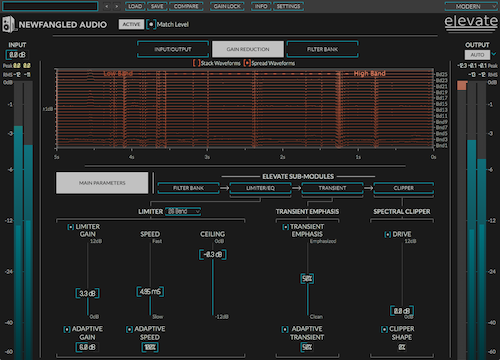 I was quite amazed at the transparency of the limiter, even at quite extreme settings! As with Izotope Ozone, it has a handy auto gain reduction on the master so you can monitor the plug in effect without being distracted by the audible boost in volume. When you want to add some colour, there is a spectral clipper on hand to overdrive the output for more ‘bite’.

As expected with a processor intensive plug-in such as this, with nothing else running in my DAW the CPU (on my old 2008 mac pro) jumped to 40% when idle, so I don’t think I’ll be running multiple instances of this as a mix tool, at least not until I get a newer studio computer. But for running as a mastering plug in on a stereo mix, it worked perfectly without any hiccups. My project was 24bit 96kHz.

The plug in uses adaptive algorithms to adjust the gain, speed, and transients over 26 frequency bands, in real time. When compared to the relatively old mastering plug ins I’ve been relying on over the years, this is quite insane! Really powerful.

Without a doubt, this is the most transparent and clear limiter I’ve come across in the digital domain, it’s also really easy to use. The duel function envelopes and auto adjusting parameters, makes it really quick to get things sounding enhanced in a very musical way. I can honestly say I think I will be using this on everything from now on!