A lot of my current output, both for upcoming releases and for tv/media, have been composed ‘live’ on my modular synth. I tend to record a few takes in one shot, until I get something that I’m happy with as a complete piece. Once I have a stereo file I am content with, I will apply various mastering processes in the box to get the audio sounding balanced and enhanced as appropriate.

When I received Fiedler Audio’s Stage plug-in for review I was excited, as on paper, it’s actually a tool I’ve been hankering for. My ancient version of Ozone (v4) is only 32bit and although I know it inside-out and get good results, I’m hesitant to pay the upgrade just so it works on a recent version of Ableton. So I currently still do my mastering in Logic 9 with Ozone 4. Anyway, the stereo enhancing module in Ozone is something I regularly use to spread out some of the mid-higher frequencies, but it’s relatively limited in features. The current music I have been writing is completely beatless ambient music. So stereo tricks can really be utilised to great effect (without fear of damaging drums or low end etc) and I found myself looking for a more specific stereo enhancing tool, then lo and behold, along comes Stage.

The plug-in comes via Plugin Alliance, an umbrella company which offers various developers’ offerings under one virtual roof. I’ve seen a few plugins being distributed this way and I guess it takes the headache of purchasing and licence authorisation away from the developers, so they can concentrate on making our plugins. Plugin Alliance describe themselves as a “new uber standard”, which suggests they are positioning themselves at the professional end of the audio tools market.

Authorising was very painless and I much preferred this method to using the ubiquitous iLok song and dance. However, I’m not sure how easy it would be without an internet connection! Anyway, you create an account online with Plugin Alliance, buy the plugin, open it in your DAW and ‘click to activate’ and off you go – pretty smooth! 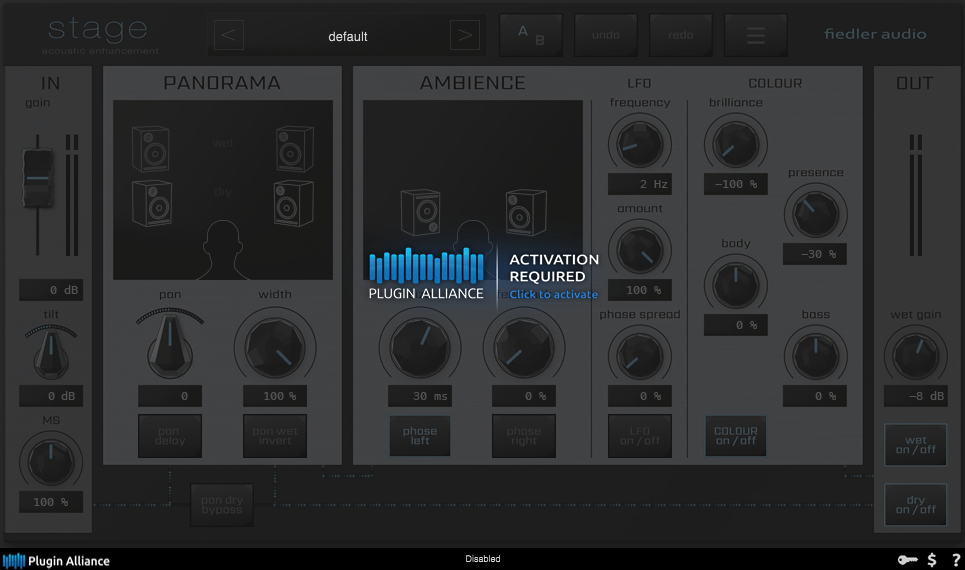 Testing the plugin out I was surprised at the range of applications it could be used for. I had initially expected it as a mastering tool, which it performs well at, in that it is transparent, subtle and relatively precise. However, it has many extra controls, which enable it to perform as a really nice chorus, or flanger, or crazy stereo mangler for example, which would work great on instrument tracks like guitars and synths etc.

The user interface is well thought out, with a clear signal path and useful animations to represent the relevant speed of LFO modulation and active audio routings etc.

The general signal flow has the IN stage, which allows some stereo correction, something I use especially on some analogue hardware where one output may be slightly hotter than another etc.

Then there is PANORAMA, the main element for positioning sounds within the stereo field and adding width.

Finally, AMBIENCE allows further creative shaping of the stereo space, with stereo enhancement tools and colouring and some really interesting LFO modulation parameters. These kind of take the plugin beyond a typical mastering enhancer, into a creative sound design tool.

In the following audio example, I feed a mono FM patch w/stereo reverb in to the Stage and automate some of the parameters:

Currently, the plugin is on sale at $99, rising to $179 end of August. Which, as a fairly specific application, might seem expensive for ‘just’ a panning tool. However the sound, interface and overall quality of the plugin shines through and I can’t think of many comparative tools available out there, certainly none that come bundled with a daw.