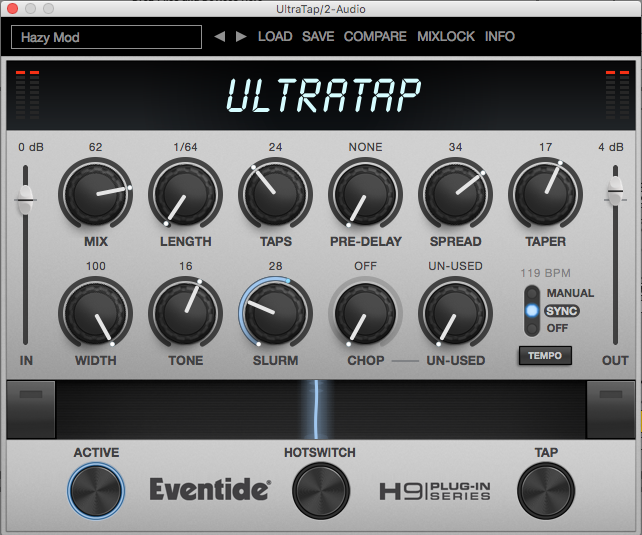 Eventide should need no introduction, their digital reverbs are known as some of the best in the business. The SP2016 rack in the early 80’s, provided many of those super-clean shimmering time-based FX, synonymous with that era of audio production.

Until recently, if you wanted to obtain one of their effect algorithms to use on a track, such as the legendary BLACKHOLE preset, you would have to purchase one of their hardware boxes, like the Space pedal for example. That’s all changed now and Eventide have started releasing select effects from their range as plug ins, hurray!

The UltraTap is described “as a unique multi-tap effects plug-in capable of rhythmic delays, glitchy reverbs, huge pad-like volume swells, and extraordinary modulation derived from its TEC Award-winning H9 Harmonizer® Effects Processor”. Those unfamiliar with the H9, it is a relatively small stompbox which featured many algorithms imported directly from their classic (and legendarily expensive) Harmoniser range.

TheUltraTap is the first algorithm from a range called the H9 Plug-in Series, which suggests more are to be released.

TheUltraTap is capable of a range of different time-based stereo effects, namely combinations reverb, multi tap delays and some interesting LFO trickery. The result is a very clean and modern sounding effect, which can get glitchy and very weird if you want it to. Everything from simple ping pong delays, scattering echoes and big engulfing reverbs are possible

I own the Space reverb pedal and the interface is reminiscent of it, in that there are lots of hands on control over a multitude of parameters, which is begging to be manipulated into crazy evolving effects. The UltraTap takes this one step further and adds a faux ribbon control across the bottom, it’s really easy to assign a specific parameter range on multiple controls to the ribbon, then dragging the ribbon will affect all of these simultaneously. Another similarity to the Space pedal is the arrangement of the three active, hot switch and tap buttons, although I’m not sure I’d find a use for these in a DAW environment (as opposed to in a guitar stomp box).

The plugin starts to reveal itself as you find the hidden functions, for example turning ‘CHOP’ reveals multiple functions such as LFO types and other purposes like ‘swell’, sample+hold  and ‘trigger’. Each one changes it’s neighbouring knob accordingly as a complimentary  control, for example selecting an LFO will give you an LFO speed, whereas ‘swell’ will offer a rise amount.

To give an example of the various modulation effects, I have loaded up a simple beat and pad sound and automated a couple of UltraTap instances to give an idea of the possible sounds.

At the time of writing, UltraTap is selling for $49 at Eventide, which seems like a steal for what you get – a professional sounding multi effect plug in, with a slick interface. I know many producers will be breathing a sigh of relief that they can finally access those elusive Eventide FX in-the-box.  I’m definitely keen to see what else they release in the H9 series!